Dance dance groove with Erasure's Chains of Love from 1988.

Posted by Maxine at 8:46 PM No comments:

With thanks to Allrecipes.com and all the wonderful comments over there, I made this apple cake recently and it was considered a winner!
Tasty, moist, super-chock full of apples and delicious. Aside from chopping and coring all the apples it isn't a hard cake to make either. And, it looked lovely when it was done. This would be a lovely cake to take with you to someone's house for dessert.


Directions
1) Preheat oven to 350 F.
2) Grease and flour baking dish. I used a bundt pan- but a square cake dish will work too.
For a great tasting cake, instead of flouring the pan, create a small dish of cinnamon and sugar and sprinkle that around the edges of the pan. It works like the flour, and the cake won't stick, but it gives a nice touch of cinnamon and caramelized sugar on the outside of the cake.

3) Cream the eggs and oil together until well mixed and creamy. Add the sugar and vanilla and continue to beat well.

6) Once the cake is cool you can serve as is, make a salty caramel sauce for it, use a cream cheese frosting or, use a light dusting of icing sugar.
This cake recipe isn't all that sweet, which means you can go all out for the toppings and not worry about sweetness! 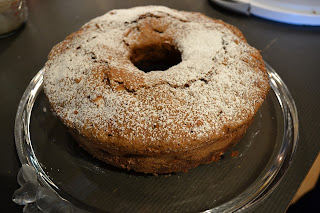 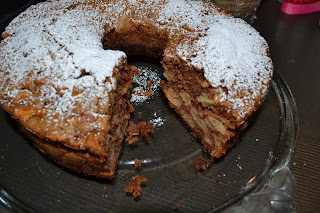 Posted by Maxine at 9:02 PM No comments:

Email ThisBlogThis!Share to TwitterShare to FacebookShare to Pinterest
Labels: Recipe

I love Jennifer Ashley's writing. Although you can clearly see how her writing style has shifted and become more complex in her newer works it does not effect the whimsical writing style and story lines of her earlier books.

Meagan Tavistock is a simple country girl who gets caught in between a love spell and Grand Duke of Nvengaria, Alexander. Intrigues, magic and spies abound in this book, but it never loses sight of the main point- the romance between Meagan and Alexander.

Sweet, touching, entertaining and smoking hot, this is one of my favorite romances to reread when I'm in the mood for an uplifting story.

View all my reviews
Posted by Maxine at 12:50 PM No comments:


Overall this was a fabulous read. A pleasant surprise from the usual paranormals out there, and Nalini Singh even manged to make angels an acceptable category of hunk.

Well paced, well written and an unique and interesting world parallel to ours, but with some major differences, is where book one of Singh's new series takes place.

I've really enjoyed her other Psy-Changeling series, so I was more than willing to give her new world a try.

This is a world with Vampires, Angels, Archangels and "Hunters" that hunt the rouge vampires at the behests of the angels.

Elena is our main character, she is the prototypical "spunky" alpha-female. Sometimes she was a bit too spunky for me. When faced with an archangel that most of the city fears sometimes reticence is the better part of valor. And mouthing off to an immortal is not the brightest thing to do.

Raphael, the Archangel, is suitably hunky, arrogant and typically alpha-male. Yet, Singh manages to make him human enough that we can like and empathize with him anyway. I quite like Raphael. He is protective of his people, merciful yet equally harsh.

Together they make quite a pair while they hunt down a rogue archangel set to take out New York City. Although I had some issues with the characterization of both our characters, I felt the romance between our two leads was a bit strained at time- less of a romance and more lust - but I think that books 2 and 3 of the series should expand that relationship adequately.

I won't give away any of the plot, as it was fast paced and quite interesting, but suffice it to say I really enjoyed this book. A solid, solid entry into the paranormal market, and I can't wait to start reading the second one!
View all my reviews
Posted by Maxine at 9:52 PM No comments:

I've decided to switch my blog servers (again) as you can probably tell, back to Blogger. I like their interface better and find it a bit easier to use.
Apologies for taking off over two-months blog time, but I'm back in action for the spring/summer/fall season with some fabulous shows coming up.
Show #1 is in honor of Earth Day 2011, Saturday April 16th.
It's in Kitchener, Ontario at the City Hall.
Featuring a fashion show, workshops, tips on how to live-green and a great lineup of vendors it looks like it will be a fantastic time! 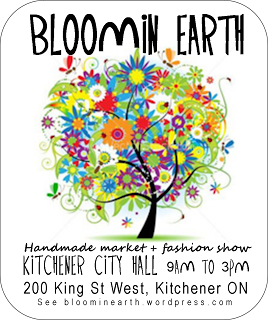 I hope to see you all there!
Posted by Maxine at 1:21 PM No comments:

Maxine
The MadStone Soapery is my business and I blog about craft shows, new products, product ideas, ingredients and the alchemy of lotion-crafting. This is also a blog for my general thoughts and ideas. Working in the publishing industry, movie reviews, book reviews, Warcraft musings and other fabulous, random and thought provoking topics. I've got a degree in anthropology and environmental studies, as well as a certificate in publishing.